As most building science nerds know, in the past five years we have been inundated with new products to help us build to Passive House or Net Zero standards. You would assume that most of the building science professionals have a good handle on all of the latest products, however, some recent conversations with experts in the field led me to believe that there is still a lot of unknowns. Like myself, many “experts” are still overwhelmed with finding the best approach for controlling moisture in walls and products that can assist in achieving air-tighness, while allowing vapor permeability in the right direction, as well as understanding human health impacts of the chemicals used in the materials.

A little background for the layman: 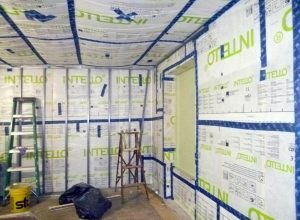 elopes. Initially, the industry had not yet opened the doors to balanced ventilation using ERVs and HRVs, and even today, we are still building exhaust only ventilation systems. As buildings got tighter, ventilation systems didn’t change and thus did not have proper air circulation. When people started getting sick from mold and lack of fresh air, the term  “sick building syndrome” was born and many people found out the hard way that tighter, didn’t always mean better when it came to human health. Where older buildings had relied upon air leakage for fresh make-up air, these newer buildings were tighter and thus started trapping moisture, which allowed mold to grow within the walls, feeding off wet wood and d 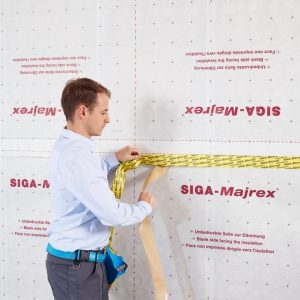 rywall, hidden from the occupants within the wall. There were many instances of people becoming quite sick due to exposure to mold spores and fungal growth within their homes and work places. I personally have seen buildings with mushrooms growing out of the wall around windows and doors.

So, back to today. We now know that in order to build energy efficient building envelopes, we need to create an airtight layer, but we also need to make sure we control moisture within the walls. The main sources of moisture are: 1. Outdoor Water (rain), 2. Exterior Humidity and 3. Interior Humidity. When we build a tight envelope to achieve Passive House for instance, the design suddenly becomes a bit more complicated that previously. We need to understand the basics of temperature differentials inside and outside the building and dew points, to know where there may be potential for condensation accumulation. Though we can control fresh air through mechanical means, we can’t however always dictate moisture build up within the building envelope. So in order to build high performance buildings that are also durable, we need to know how our building products work, especially key components like air and vapor barriers.

Two of the leading interior vapor barriers being used today for Passive House and high performance projects are SIGA products and Pro Clima’s Intello Plus membranes. Both companies have products which are Passive House Certified components.

As I mentioned, many people in the industry are still confused on which product they should be using for their particular application. So I’ve done the digging so you can just read and make a choice for yourself.

SIGA Majrex:
The SIGA, Majrex membrane was designed based on the natural moisture balance of a cactus which SIGA calls Hyg

robrid technology. A cactus allows for moisture into the plant at night to trap the moisture inside during the day, to prevent the plant from drying out in the hot/dry desert climate. Similar to th 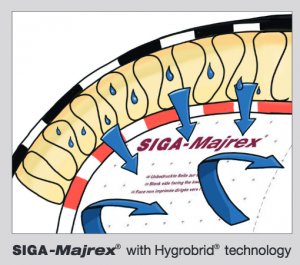 e cactus, Majrex allows the moisture to move from within the wall to the inside of the building but doesn’t allow interior moisture into the wall. This is called “one direction vapor transporation”, as moisture only moves to the interior.  (I do like how they are using biomimicry to describe the product.)One directional drying helps to prevent microbial growth from building up from condensation that becomes trapped within or continually moves through the wall. Moisture within the building can then  be addressed though ventilation (HRV or ERV). Majrex provides permability ratings for both sides of the membrane,Direction 1: 0.17-3.8 perm (ASTM E96) Direction 2: (the logo side) 0.16-1.3 perm indicating the interior side is less permeable as described above. Majrex is 12 mils thick and comes in 4.9 ft width and 164 ft long rolls.

Pro Clima – Intello Plus:
Intello Plus by Pro Clima is known as a vapor variable retarder, which claims to have “adjustable permeability” based on humidity levels. In the winter, when the air is dryer, the permeability of 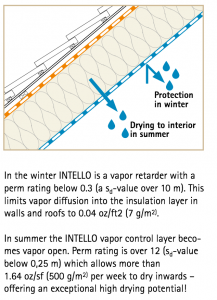 the material remains low, to prevent wetting of insulation from interior moisture. In the summer, when relative humidity is high, the material opens further to allow max diffusion openness, to increase drying potential to the interior. Intello’s variable permability ranges from 0.2 – 6 perm (ASTM E96) (DIN EN 1931 <0.13m to 13.2m) and is 16 mils thick. The rolls come in 5 ft and 10ft wide and 65 ft and 164 ft long. Pro Clima claims the product is fully recyclable as it is made of polypropylene microfiber fleece, vapor variable polyethelene co-polymer with polypropylene non-woven fabric. The tape used with Intello Plus is Tescon Vana. Product Health:

With regards to transparency in material health and chemicals, Intello Plus wins. Intello Plus not only has a ILFI’s (International Living Future Institute) Declare Label, it is also “Red List Free” meaning that the product has been inspected for all chemicals on the Red List, which is used by the Living Building Challenge to eliminate the use of the highest risk chemicals on projects. SIGA’s rep mentioned that they don’t use any harmful chemicals, but said that they have chosen not to pursue the Declare Label for proprietary reasons.

HEALTH: Intello Plus has no “Red List” chemicals and has been transparent about the chemicals used in the product using ILFI’s Declare Label.  SIGA has not provided chemical transparency and is looking to provide more information. Winner: Intello Plus

PERFORMANCE: Performance between the two products isn’t a simple answer unless we see failures in the field or if some specific testing is done. I believe that climate zone may dictate which product performs better, however this is just an assumption. Both products have been approved by the Passivhaus Institute as “Certified Components” which gives some added assurance that both products would perform quite well in a Passive House setting. From reviewing the product technical data and discussions I had with each of the product representatives, I’ve come to the following assumption: Areas with highly variable temperature and humidity, like we have here in the North East, Intello may be the better choice as it adjusts based on humidity and temperature. In areas with less variability in climate, SIGA might be just as effective if not the better choice, however I’m interested to see how each product performs over the next 10-20 years. Winner: Undetermined

SUSTAINABILITY: Both products claim to be recyclable, however the SIGA Majrex seems to be only recyclable in certain areas of the country, whereas the Intello Plus is claiming to be 100% recyclable.  Winner: Intello Plus

Overall, both products were developed with what seems a lot of research and testing backing up their performance. Both products serve as air sealing and vapor barrier membranes, though the specifics of performance do vary. Considering the categories we reviewed, the Intello Plus seems like the logical choice, especially if product transparency and health is a concern. However, we look forward to hearing from contractors installing these and other products like them, to give a clearer picture of how vapor barriers perform across the industry.


Fill out my online form.
Passivehaus or Passive House?